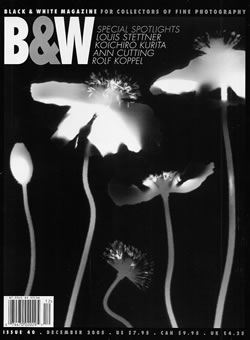 Reprinted from the December, 2005 issue of Black and White magazine.

Jeff Korte was born and raised in Minnesota, in the rural area of St. Cloud. “I feel fortunate to have lived along the Mississippi,” he says. “I spent all of my time with the river in my back yard. That kind of stuck with me and has led to why and what I photograph today.”

This latter-day Huck Finn became an explorer in his own right, with nature as his muse, the landscapes and memories of childhood giving shape to his aesthetics early on. “When I was growing up, our family made many long drives northward across Minnesota to the edge of Lake Superior,” he says. “Topping the last rise of the road above Duluth was like driving into the sky, and the reveal of light skittering on the lake far below lifted my spirit for days — and still does.” His passion for the natural world has found voice in photography, with his haunting and evocative images forged of the elements.

Korte, encouraged in both painting and photography by his father, an art teacher, began taking photographs as a teenager. He went on to receive degrees in communications, visual arts, and the natural sciences from the University of Minnesota. His interests are melded in photography. “There’s a desire in me to link the type of photography I do with the study of biology.” His work in the environment has led him to see the untrammeled areas of nature becoming more and more pocketed. He seeks to capture what he calls the “Slow ebb of the spirit of place and to question how change affects our connection to the land.” He follows in the tradition of landscape photographers he admires — Ansel Adams, Edward Weston, and Paul Caponigro. Working in a custom black and white lab gave him a feel for what film and papers could do. “I was looking for a way to evoke memories. I much prefer to remember a stretch of shoreline in the form of simplified, stripped down composition. Memory is important. If I recall a dream or a memory, it’s seldom sharp in every detail — it isn’t perfectly exposed. I began searching for that look. So I built a pinhole camera from a mailing tube.

Of late, Korte has been working with pinhole photography almost exclusively, employing wooden cameras that he makes by hand. “I almost enjoy building a camera as much as doing the photography. It brought the life back into it for me.

Korte lives in Minneapolis, and has made the area surrounding the Great Lakes region the center of his photographic explorations, especially the north shore of Lake Superior. “I’m drawn to the North Shore because it’s very elemental: the rocks, the water, and the sky’ the geometry of the shapes.”

Korte relishes the surprise element of pinhole photography. “I’m never quite sure what I’m going to capture because I’m not looking through a viewfinder. There’s no lens to finely catch the details. I’m just amazed when I get into the darkroom and hold up the negative. What happened to be a frothing, crashing day, with whitecaps pounding the shore, melts into a swirling fog during that 30 or 40 second exposure. I rely on the camera’s wide angle and the film’s forgiving latitude to record my intent. Prospecting for photographs with this camera frees me to pay more attention to looking.” Long exposures create the impression of movement over time. Pinhole plays with perspective as well, changing the landscape, and the subtle vignette around the edge evokes memory and time passing.

Korte’s work has been exhibited throughout the Midwest and West, and is held in private collections throughout the country. The artist does not limit himself to landscape, and has pursued journalism and portraiture as well as a series on the architecture of downtown Minneapolis. But he is increasingly drawn to the stark and beautiful areas where man’s influence on the environment cannot be seen — “the vanishing presence of natural and cultural remnants in the landscape.” Korte’s website contains a telling photo of him, standing with his tripod on an ice floe, appearing for all the world like one of his predecessors from the 19th century — a Timothy O’Sullivan or William Henry Jackson. Korte is creating his own photographic survey of the vanishing wilderness, his unique photographs evoking both the endurance and fragility of nature — the vanishing point.